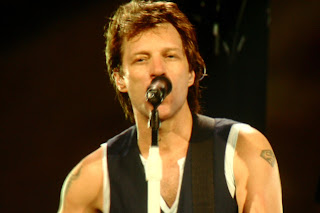 NEWARK - File this under 'dumb criminals.' According to a report, Jon Bon Jovi is a wanted man, and the artist is openly singing about the warrant for his arrest to audiences of 10,000+.

Unclear at this time is the rocker's crime, but it appears dire enough to force the 53-year old singer from New Jersey to a life on the lam.

"I drive all night," he continued, even going so far as to confirm his mode of conveyance. "On a steel horse I ride," a seeming allusion to the singer's motorcycle. The alleged criminal may even be armed with a "loaded six-string."

Despite Bon Jovi's open taunting of law enforcement, he remains at large. The wake of clues he is leaving in his tracks however will ultimately land him in custody, says Newark Chief of Police Sheilah Coley.

"Jon is becoming more and more cocky," Coley said. "It's only a matter of time before he makes a major, desperate mistake and that's when our department will pounce."

Chief Coley also pleaded that Bon Jovi turn himself in. "We'd like to see this matter rectified in a safe and peaceful manner. We can only help Jon if he decides to help himself."