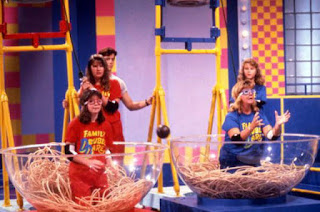 BOSTON - The committee in charge of hosting the now defunct Boston 2024 Summer Olympics bid isn't licked yet. Unnamed sources have indicated that the group now intends to refocus efforts on hosting a different set of games in the region: Nickelodeon's 'Double Dare.'

The campaign for the summer games lost steam and eventually collapsed last month when Mayor Marty Walsh refused to commit potential public funds to finance the massive undertaking. However, if a new opportunity to showcase the region using exclusively existing infrastructure and private moneys came available, the city's leaders might be interested in pursuing.

"Double Dare is an intriguing option," the source confirmed this week. "It's an opportunity to raise the visibility of this great city without the bureaucracy of the IOC or the crippling financial obligations associated with an Olympic bid."

Still, the committee anticipates running into many of the same objections that it has encountered for the past six months. Namely, what is the post-games practical application for the infrastructure that would need to be built?

"Our initial intention would be to perform an audit to ensure that everything we build would be used for the common good after the games are complete," the source said. "You're telling me Harvard couldn't find a use for an oversized pair of clown pants or a few of those massive spaghetti bowls?"

When asked if Double Dare is the only opportunity the committee would consider pursuing, the committee doesn't seem intent on limiting itself at this time. "While Double Dare seems to be the most promising, we don't want to exclude other attractive options and remain open to American Ninja Warrior or one of those weird Japanese game-shows."