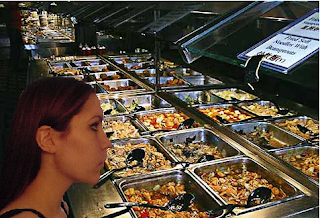 BOSTON - Local restaurant buffet owner Ajit Bhatt is concerned that he is not set up to accommodate a particularly short customer, in the event she needs to sneeze.

"These sneeze guards can accommodate a patron that is 5'2, maybe 5'1," said Bhatt. "I'm just not set up for someone shorter than that."

Bhatt's restaurant - Shawarma Buffet - is rarely faced with serving clientele who stand under five feet, but that's exactly what happened Tuesday afternoon, when Monica Gellinski submitted an order for Tandoor-baked Naan. Gellinski stands at a modest 4'10.

"I mean, she was tiny," Bhatt said. "Like, maybe she was a gymnast when she was young and her crazy parents fed her growth-stunting hormones. She was that small."

The customer's size could mean doom for the financial-district buffet if she were to launch into a sneezing fit, which is not unlikely, according to Bhatt.

"Do you have any idea how many Indian spices I have in the back? Cumin, Aniseed, Capsicum, Kalpasi, Saffron, Tamarind...if she's allergic to any one of those, this whole place could go up in a cloud of smoke."