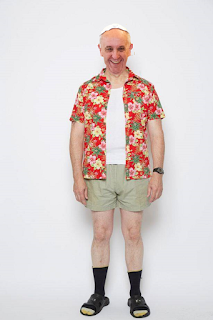 VATICAN - The Catholic Church has made strides to become less regimented in recent years to appeal to a new demographic. One of those efforts however, appears to be short-lived, as the Vatican today announced that it will be suspending 'Casual Sundays' indefinitely.

The decision to drop the informal initiative was made after several complaints were logged upon Pope Francis's arrival this past Sunday at the enclave dressed in a relaxed Hawaiian shirt with black socks, sandals and a Timex watch.

"I sought the Pope's council on a matter of great urgency," said Cardinal Ruberto Muntini. "But when I was admitted to his quarters and saw those old worn dress socks and pasty-white gams, I completely forgot that which had been troubling me."

The casual dress code was initially intended to encourage Cardinals and Bishops to begin promoting a new line of Christian golf and leisure-wear, along with a newly-minted Papal sweat-suit. Those ideas will now be put on hold.

"I just found his attire to be quite distracting," continued Muntini.

"I know he doesn't have a wife, but by God there must be someone at home who can take a look at him before he leaves the house looking like that."