Desperate Music History Teacher to Kids: Oboe Was The Autotune of its Day 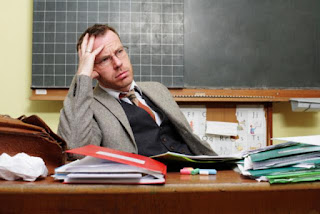 CONCORD - Sensing that he was beginning to lose the focus of his 7th grade classroom, Music History Teacher Brian McDermott pulled out all the stops on Tuesday and tried to relate to his students on their level.

"So not much was happening in the music world in the early 1700's, but then this new guy Antonio Vivaldi comes onto the scene," McDermott said. "He had attitude and he was hip; he was like Pitbull of the baroque."

McDermott's efforts initially seemed to have little impact on the disengaged nature of the classroom, but he continued the strategy in hopes of eliciting some interest.

"So there's Vivaldi, this flashy Italian and in 1716, he comes out with this new concerto for the oboe, and it just blows people's minds. I mean no one had ever heard anything like this. Yesterday, the oboe was this harmless little forgotten woodwind, and today it's just freaking people out."

Sources indicated that McDermott's analogy did garner some attention from the children, but mostly in the form of mocking giggles.

"So you kids on your iHomes love Snoop Doggity and the autotune and the Lady GaGa with her fancy hats? That," McDermott emphasized, "was Vivaldi."