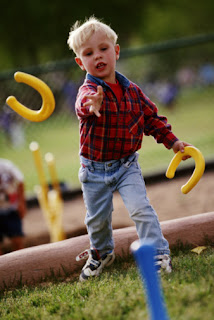 CARVER - This will sound braggy, but my five-year old son Dylan often plays with games and toys that are exclusively intended for individuals aged six and up.

Six years old. That's practically puberty. Which is practically adulthood. Steps away from supporting your own family.

And remember, these age restrictions aren't suggestions. These aren't recommendations. These are federally-regulated stipulations on which the safety and welfare of our family and society depend. These requirements might just be the last goddamn thing that Democrats and Republicans can agree on. These age limitations are as fundamentally clear to Americans as Kennedy vs. Khrushchev or Manifest Destiny.

Again, let me be clear here. My five-year old son Dylan has mastered toys ordinarily intended for children aged 6+ like he's some sort of fucking wizard. And here's the thing; he's better at them than other six year-olds! As in, other six-year olds who are purportedly advanced enough to be operating these said toys, (according to the sanctions)!

In fact, in some cases, I wonder if some of these 6+ toys shouldn't actually have their cap raised (for kids other than Dylan I mean). My neighbor's kid Dallas (don't get me started on Dallas) couldn't for the life of him figure out how to shoot this Nerf Slingshot he got last Christmas. And he's eight fucking years old! He had no clue how to use the goddamn thing. Just stared at it like some primordial primate who's encountering fire for the first time.

But not Dylan. He walked right up to that slingshot, examined it for a few seconds, and fired a fucking dart right at Dallas's cat like he was a goddamn Navy Seal. Fucking taking out Bin Laden and shit.

I do hope that Dallas eventually figures things out though. His mom has had such a hard time this past year.

Now I'm really excited to see what age six holds for Dylan. Will his development continue on it's current linear path or will he begin developing at an exponential rate annually? Say for example his IQ last year was 90 and this year it's 95, and next year it's 105, then 125, then 165 and so forth. By the time he's 20, his IQ will be well above 1,000, and he'll be capable of any job on earth, but he'll still choose to be an Environment Lawyer like his daddy because that's such an important and meaningful way to contribute to society.

The health of our planet is just so critical, don't you think?

If we don't get India and China to pledge to major carbon emission cuts by 2030, I'm just so terrified of the world in which Dylan will need to live after I'm gone. Dylan deserves better, but even if the polar ice-caps melt, I know that Dylan will be among the small percentage of the population that perseveres and thrives because he's just so resourceful you know? He'll be fine, I just know he will.

For this reason, my son Dylan is my hero. And he should be yours too.