Goodyear Blimp First, Only Victim of Drone Technology So Far 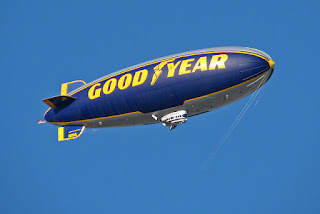 It was once believed that the introduction of drone technology would be an exclusively positive force on modern-day society with limitless benefits and absolutely no drawbacks. It is a sentiment that looks naïve in retrospect, as the first major victim of unpiloted aerial vehicles will likely have a devastating impact on our way of life moving forward.

That victim? The Goodyear Blimp.

The R&D brains behind drone technology have advanced the science with only the best intentions, producing the invention to have exclusively positive and philanthropic output. As inventors will often tell you though, once a new piece of equipment is made public, there is often no telling what applications the market may identify for it.

Regrettably, one of those drone applications now looks to be the aerial coverage for television broadcast - often in the context of sporting events. It's a job that has traditionally been held by the Goodyear Blimp, a national treasure. With these recent technological advancements though, the blimp now seems in danger of becoming obsolete.

"Yes, the blimp is iconic," said Cynthia Dunnam, a mechanical engineer. "But as is the case with any innovation, markets will shift and casualties will be the side-effect of progress. The blimp now looks to be one of those such unforeseen casualties."

While Dunnam isn't thrilled to see the recognizable blimp grounded, she's just happy that other, more sinister utilizations have not been identified for drones. "I will never be thrilled by the loss of the blimp, but if it's the last victim to be claimed by unmanned aircraft, I can still rest soundly."