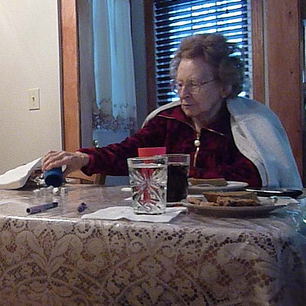 "Every single roll, she'd add up the dice and pencil the sum into the 'chance' column," said Adam Kurtz, 17. "We kept trying to explain to her that 'chance' is a safety-net roll. She just didn't get it."

Ruth Kurtz claims that she has played the game before and has a mastery of the rules, but her family experienced otherwise during their visit to her home in Malden.

Her son Paul seemed resigned to allow her to play the game however she wanted to play it. "Yeah it's not smart to keep rolling for 'chance,' nor is it even legal," he said. "Honestly, I think she just enjoys rattling the dice in the cup. She likes the sound."

Following the game, the grandmother suggested the family walk to the pond to feed the ducks, which Adam Kurtz described as an activity "that's more her speed."