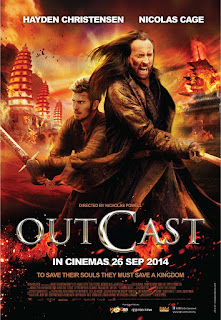 The heartthrob who was rocketed to fame and fortune during the Star Wars reboot has reconsidered his life's priorities, and has chosen to shun the public stage and embrace anonymity by starring in a movie with Nicolas Cage.

"It's easy to think that unending love and adoration from a multitude of fans is a fulfilling way to live one's life," the 34-year old actor said. "But I found very quickly that fame and recognition can lead to loneliness and depression."

All reasons why Christensen - who starred as the infamous Anakin Skywalker - has chosen to play his next role alongside Nicolas Cage to ensure that absolutely no one will pay him attention.

"The new movie is called 'Outcast' and my agent assures me that it's the next step above entering the witness protection program," Christensen said. "There isn't even really a story. It's mostly just shots of Nic and I shooting clay pigeons at his ranch. It was a really enlightening three months."

As for future projects, Christensen isn't concerning himself with that right now. "Oh, I highly doubt the phone will be ringing much after this one."