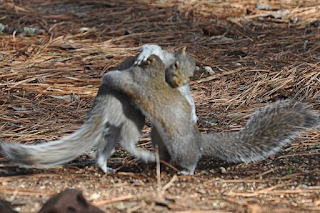 "We were having a delightful time," said Kathy Kruger, 47. "We had plenty of sunshine, hot dogs on the grill and three generations of Kruger enjoying the final days of summer. Then it all came to an abrupt and unsightly end."

The squirrels - for whom this time of year is often dedicated to mating - were reportedly scampering about the ground and then from limb to limb across several pine trees. Sources indicated that they were causing "quite a little racket."

Reactions to the sensual squirrel dance from the family varied. Some of the younger children who were engaged in a whiffle ball game initially reported that the animals were wrestling while others just snickered to themselves. Grandma Kruger, 89, reportedly gave the sign of the cross.

The picnic quickly disbanded and the family has indicated that the scene may force the group to change the format next year.

"Maybe we'll go to a roller rink in 2016 instead," said Kathy. "Someplace where we won't be subjected to nature's dark house of burlesque."