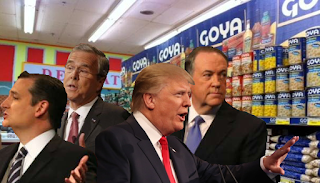 IOWA - Republican candidates who are seeking to bolster their poll numbers and broaden their base have employed new tactics to reach a core constituency with which the GOP has traditionally struggled: the Hispanic vote.

Those efforts to connect with the growing minority were on display on Monday, when several of the leaders in the polls shopped at a downtown Des Moines supermarket, exclusively in the Goya aisle.

"That ought to do it," said Mike Huckabee, the former Governor of Arkansas as he loaded his basket with frijoles negroes.

GOP policy - particularly on immigration and border security - have at times alienated America's fastest growing voting demographic. It's a demographic that Democrats have dominated in recent elections, and many insiders from within the Republican party have whispered that drastic measures are in order if a candidate on the right is going to reclaim the White House.

Donald Trump - who has historically been aggressive in calling for a border wall - feels as though the candidates' visit to the Goya aisle is just the sort of diplomacy the Republicans need to win back the Hispanic vote.

"What do we have here," Trump said, while sorting through his cart. "Coconut soda, pineapple soda, ceviche seasoning...something called sofrito."

The visit to the Goya aisle lasted all of 45 minutes for the Republican frontrunners, which included photo-ops and an opportunity for each candidate to personally connect with Iowan shoppers.

The session wrapped up when Ted Cruz asked a grocery stock-boy named Javier to "show me your papers."