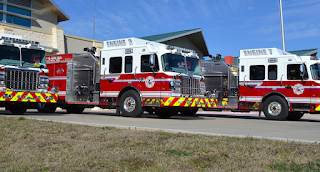 MAYNARD -  The Maynard Municipal Fire Department sent it's entire fleet - three trucks - to fight a local blaze in a display that residents called "a bit much."

The fire, which broke out late Tuesday night on Parker Street, raged for about five hours before the team was able to get the scene under control. Damages were reported at one residence and no injuries were reported.

Neighbor Anthony Pistone Jr. saw the department's response to the "emergency" from his porch. "One truck makes sense, maybe even two. But three? I don't know, that just seemed over the top considering the situation."

Maynard Fire Chief Alex Buizone stated that sending the entire fleet is a standard procedure for residential fires. "This was an example of a serious situation that called for the extent of our resources. I stand by our decision to react in a prompt and appropriately measured manner. It was the best way to ensure the safety of the surrounding area."

Still, bystanders felt that the department's handling of the situation was excessive.

Said Pistone, "When my family goes out for pizza, we don't take two cars to the restaurant just to show the other patrons how well we are doing, you know?"