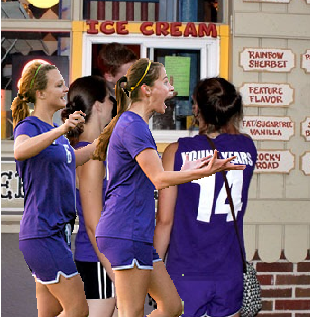 HANOVER - Good luck ordering that banana split in a timely fashion if you showed up at the South Shore Creamery around 8pm last night. Delays were rampant when a school bus full with middle school girls showed up following their soccer game, causing massive waiting times.

That's exactly what happened to local man Kevin Pursey when he and his wife showed up with their dog for two cups of ice cream, and were forced to wait for 30 minutes before the creamery's lone attendant was able to take their order.

Benjamin Cass, 17, was the sole employee working at the ice cream shop last night, and he was a little overwhelmed. "They kept asking for all these flavors and toppings that we don't have. One of them dropped her soft-serve on her phone," he said. "It was a whole ordeal."

Cass ordinarily is able to clean and close the shop by 9:30pm, but the added business kept him busy long beyond 11pm. "This is not a good job," he said.