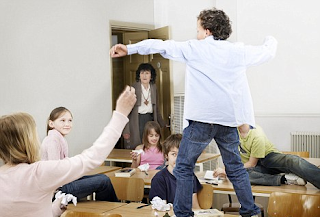 "There was a very clear demarcation between the two camps," said teacher Mrs. Joan Quigley. "What began as level-minded discourse ended in overturned desks and skinned-knees. I'm still in shock over how quickly it happened."

The discussion, which centered on contrasting lessons learned from Silverstein's 'A Light in the Attic' and Dahl's 'Matilda,' soon erupted into a shouting match among the students, and escalated when a rubber-cement ball was thrown in the direction of the Dahl supporters.

Said 9-year old Christian Sullivan, "There's much that I can tolerate from other perspectives, but when someone begins attacking the tenets of 'Where the Sidewalk Ends,' I take it as a personal affront."

Though the episode was contained within a few minutes, tensions in the classroom remain high. "I don't regret anything," said Sullivan, who kicked a fellow classmate in the shin. "I would proudly stand up for Silverstein again if the need arises.