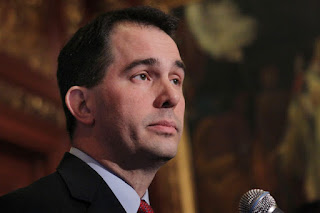 WASHINGTON - Scott Walker wants NASA to go away; and not because of the federal budget impact defunding the program would have. Instead, the Wisconsin Governor and GOP candidate views NASA's open search for life in other solar systems as an invitation to extraterrestrials to mooch off of the nation's public aid programs.

"It's bad enough that we have illegal Mexicans vying for good jobs in America," Walker said. "But here we have a federally-funded program openly inviting Martians to become a part of our society? When that little green man gets hurt on the job, guess who is going to be left holding the bill?"

NASA announced in 2014 the likelihood that life on other planets would soon be verified, a direct result of the 2009 launch of the Kepler Space Telescope. Potential localized candidates for harboring life include Mars, Jupiter's icy moons and several destinations outside our solar system.

Walker is also concerned about the country's border to the north, and is open to constructing a 5,525-mile Canadian wall to officially shut off access from both the north and south.

While such a wall would be a step in the right direction, it would still be insufficient to completely isolating the United States, in Walker's view.

"A Mexican and Canadian wall make sense, but we would still be open to access for Martians who would gain entry from the sky. For this reason, I would like to propose a massive dome to cover the entire country. No one in. No one out."

A NASA spokesman has indicated that the organization has chosen not to indulge Walker's remarks.