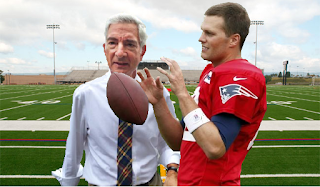 NEW YORK - Judge Richard M. Berman ruled in favor of Patriots Quarterback Tom Brady in his case against the NFL on Thursday, overturning Commissioner Roger Goodell's initial 4-game suspension. The decision allowed Brady and Berman to get back to the US District Judge's football tutorials from the Super Bowl winner.

"It's so hard for me to grip the ball right around the laces sometimes," Berman said. "Especially if the ball is slick or too hard. Tom has given me some pointers on where to place my index finger on the ball to throw a more consistent spiral."

Brady at one point considered the Judge to be hopeless, but feels he is making some strong progress.

"At first, he couldn't hit the side of a barn, but we've been working on some basic mechanics," Brady said. "He's delivering a more consistent ball after some drills I've given him. It's evident he's been practicing."

When asked if his lessons would continue into the fall, the Judge was cautiously hopeful. "Oh I'm sure Tom has so much going on with the season," Berman said. "But you never know. He's just so great. A great player, and a better person."